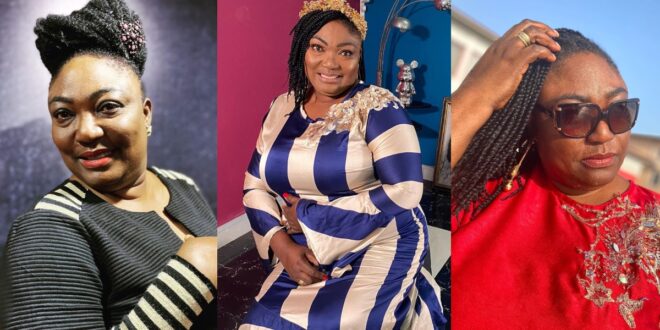 Actress Irene Opare narrates how she was f!ngered when she was 19 years by a man (video)

Irene Opare, a veteran Ghanaian actress, has made several startling disclosures regarding her history. When she was just 19 years old, the actress admitted that she was almost [email protected]

Irene Opare told the story of her unforgettable night on “Den Tinz Some Talk Show.”

She said there was a man in her neighborhood who often addressed her as his wife and invited her to meet him.

When the actress was sent to buy Kenkey, he took the opportunity to meet the young man, according to the actress. She dropped the errand and went to see this man.

When she went, she said the guy was ecstatic. She was ordered to take off her dress so he could see her pu$$y.

Following his obedience, the man complimented her pu$$y and then asked to finger her. She complied and remarked about how enjoyable it was.

The man then begged her to lay down so they could have s3x, but she refused and ran off. She said she had forgotten she had been sent to purchase Kenkey and that she was receiving the beating of her life as a result.

That is a memory she will cherish for the rest of her life.