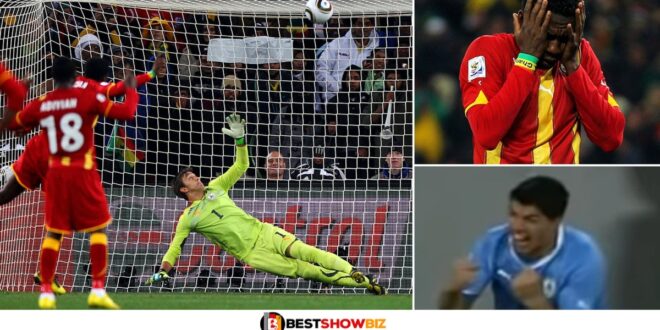 “The penalty i missed was normal”- Asamoah Gyan

Asamoah Gyan says missing Ghana’s game-winning penalty at the 2010 World Cup was not a big deal since every player in his lifetime has missed a penalty before, but he does not like that it came at such a crucial moment.

According to the former Blackstar’s Stricker, impatient Ghanaians made a big deal out of his penalty miss against Uruguay at the quarter finals.

Asamoah Gyan is reported to have said: “It’s either you miss or you score. Emotionally, what hit me is the time I missed the penalty. If I had scored, that was the end of the game. That is what hurts me. But in terms of the miss itself, it is normal”.

The former Black Stars captain could have made history for himself and the team if he had converted that critical penalty against Uruguay in the 2010 World Cup in South Africa. On what was likely the final kick of the game, South American striker Luis Suarez used both hands to deftly deny Dominic Adiyiah’s goal-bound strike.

A red card for Suarez and a penalty for Ghana resulted from his deliberate handball. Asamoah Gyan missed the goal on a penalty kick, sending the game to overtime which eventually resulted in Ghana being knocked out of the competition.