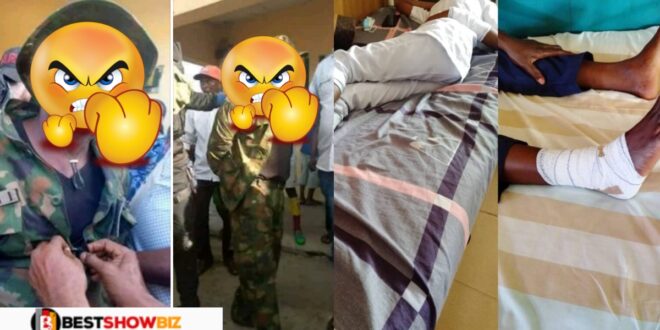 On Friday, October 22, the soldier accompanied his pregnant wife to Sobi Specialist Hospital at Okelele Primary Health Centre in Ilorin.

When the soldier’s wife was admitted to the labor room, one of the nurses allegedly urged them to buy delivery bags.

Sources say the soldier refused to seek delivery packs, stating that the state government had given them for pregnant women who might have delivered at the hospital.

As a result, he needed to give the delivery packs for his wife to utilize during her delivery at the labor room. “But the soldier became angry and attacked the nurse, breaking one of her legs,” the source said.

Read Also  "My husband does not know the house we live in is mine, he pays rent to me"- Lady reveals

The nurse who was injured in the event is now in the hospital.

According to Alhaji Shehu Aminu, the state chapter leader of the National Association of Nigeria Nurses and Midwives, the soldier escorted his pregnant wife to the hospital for the birth.

Upon admitting the soldier’s wife into the birth room, the nurse instructed the soldier to obtain delivery kits containing hand gloves and other items.

Instead of getting the delivery kits, the soldier told the nurse that he couldn’t because the state government had given everything at the hospital, he said. Unsatisfied with the nurse’s explanation, the soldier stormed into the doctor’s office and began savagely punching two nurses. The soldier slapped one of the nurses, who ran for her life.

Read Also  "Marriage is not like shopping, where you go and pick, stop putting pressure on people"- Mzvee (video)

And that the state administration had informed the Nigerian Army headquarters in Abuja, and that he had been apprehended in Ilorin.

The soldier has been placed in the guard room for further questioning, according to St. Sgt Waziri, Public Relations Officer of the 22 Armoured Brigade, Sobi Cantonment, Ilorin.