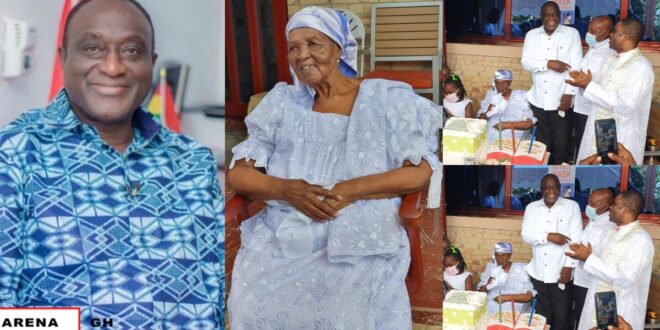 Today, May 22, 2021, Victoria Kyerematen, the mother of Minister of Trade and Industry Alan Kyerematen, turns a year older.

Her family has thrown a little party in her honor to commemorate her 101st birthday.

Photos from the birthday bash have surfaced on the internet.

Mrs Kyerematen is dressed in an all-white lace gown with blue and white headgear, according to images obtained by Arenagh.com.

Alan, who was also wearing a white shirt, was seated by the mother, alongside a man dressed as a priest.

Some guests were on the other side of the table, like little children who were thought to be the celebrant’s great-grandchildren.

A banner with Mrs Kyerematen’s portrait and a birthday cake with candles adorned the table.

Happy birthday Mama, as you chalk the blessed age of 101 today, l pray God blesses you with continued good health and grace to live for many more years.