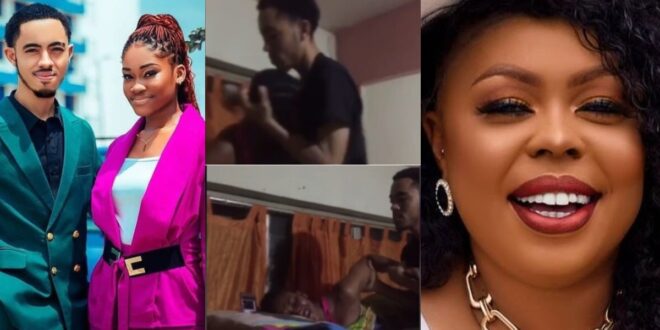 A video has surfaced online showing Afia Schwarzenegger’s son’s girlfriend in tears, with her boyfriend consoling her and urging her to return.

After a bedroom picture of the pair surfaced online, Afia Schwarzenegger openly condemned claims that one of her twins, James Ian Geiling Heerdegan, is dating a lady named Naa Korshie, who happens to be his classmate.

Afia Schwarzenegger claims that her sons are her investments, and that she would not allow them to marry any girl who receives her education in Ghana, a statement that is thought to have ended her son’s relationship with Naa weeks earlier.

However, in the most recent video, Naa is seen crying as James consoles her.

According to reports, though consoling her, James pleaded for her to return to him despite his mother’s criticism of their relationship.