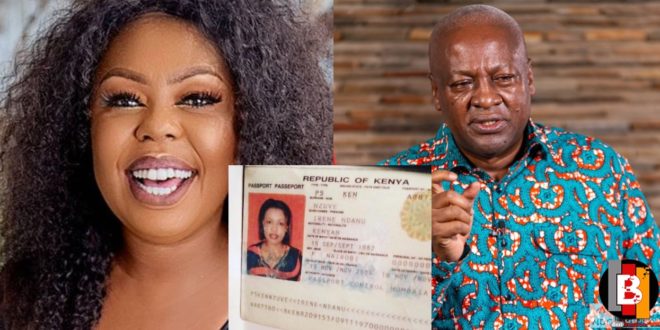 Afia Schwar has launched another attack at the camp of the NDC flag bearer, John Mahama – after some netizens used his daughter to troll her twin boys; calling them dumb.

As reported earlier, some social media users took it upon themselves to troll the comedienne by saying Mahama’s Farida has “brains than both of her twins combined”. This was however to force the mother of three, who has for some months now imposed herself as the NPP’s free SHS ambassador, to publish the WASSCE results of her boys.

Well in her reply, an angry Afia Schwarzenegger who saw the attack on her boys as one initiated by some NDC men, decided to drop more defamatory allegations against their flag bearer.

Afia has dropped a photo of a Kenyan woman she claims is the side chick of former President John Dramani Mahama and that Mahama used taxpayer money to build a mansion for her.

In an instagram post, Afia Schwar said “If Farida whose father has been accused of mismanagement of the country’s money is wiser than my kids… it is Just becos I am not a thief. Neither did I use anyone’s money to build a mansion for a Kenyan woman.”

According to her, she told some ‘NDC’ people “not to dare me but foolishness won’t permit you… Free SHS is better than investing in Kenyan p*ssy…”

Afia Schwarzenegger also in a separate post, shared the passport of the alleged Kenyan side chick of John Mahama with the name Nzuve Irene Ndanu. She dared the NDC to reveal the identity of the side chick to Lordina Mahama rather than being on the nerves of her twins.