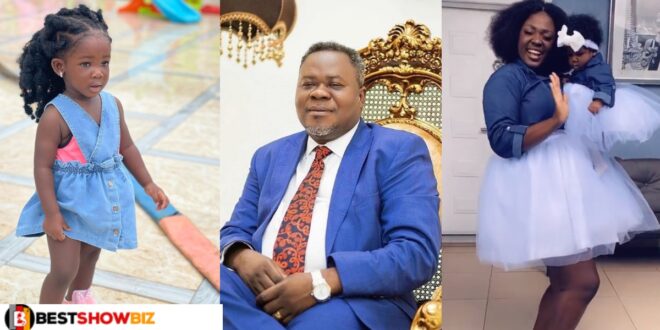 Tracey Boakye has finally spoken up about her rumored romance with Dr. Kwaku Oteng, the CEO of the Angel Group of Companies.

Dr. Kwaku Oteng is the biological father of the actress and movie producer’s daughter, Nana Akua Nhyira, according to sources.

The mother of two, whose first son’s father is well-known but whose second child father is unknown, has slammed critics by teasing Nana Akua’s father.

Tracey Boakye revealed that Akua’s father is a well-to-do man who is not a social media type in a video prepared specifically to address her baby daddy difficulties and her relationship with Dr. Kwaku Oteng.

He’s even been going to the Accra Mall with Nana Akua Nhyira when he’s home, she urged.

Akua’s father, according to Tracey Boakye, is the one who has been supporting the frequent family holidays, thus speculations that Dr. Kwaku Oteng is her bankroller should be dismissed.

Many people have met Akua and her father in some capacity before, but they are unaware that he is the one, according to the outspoken socialite.