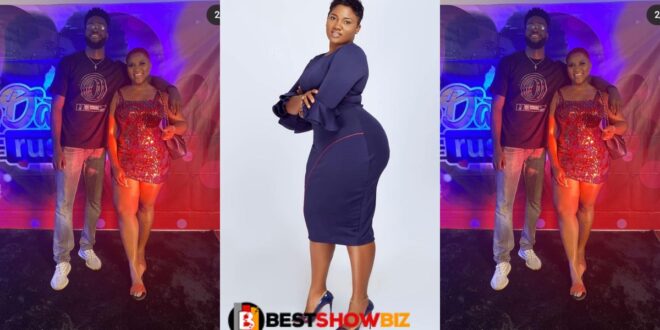 Abena korkor makes appearance on DateRush; shows of her man

After her initial appearance on the show, Abena Korkor disregarded all the rules by showing off her date Rush.

Date Rush is a popular programme that airs on Media General TV3 every Sunday at 8:00 p.m. and is broadcast live on television.

The program, on the other hand, is shown or organized the day before it is televised for public viewing.

According to one guideline, no dates are to be shown off until the program is broadcast on television.

Former TV host Abena Korkor, on the other hand, has breached all rules in order to flaunt her date from the show.

Read Also  Most People Pretend To Be Humble When They Are Poor, Wait Till They Become Rich – Nathaniel Bassey

Kodark, the new date, plans to be a musician in the industry and has chosen Abena Korkor to be his date.

This comes after she made the surprising admission that she had been in bed with some of the industry’s biggest names.

Abena Korkor revealed she had s3x with Joy FM’s Kojo Yankson a few years ago, but all he wanted was fun while she wanted something more serious than just good s3x in a long video she published on Instagram.

In the video, Abena Korkor also revealed that when she was dating broadcast journalist Kojo Yankson, he was also sleeping with actress Lydia Forson and GHone TV general manager Nana Aba Anamoah at the same time, but they were probably unaware.