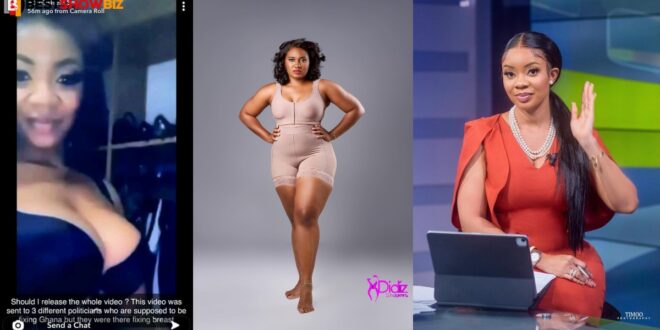 Kwame A Plus accused Abena Korkor of being behind the snapchat account that leaked outrageous charges against Serwaa Amihere, and Abena Korkor promptly responded.

Korkor has a simple message for you: all the rumors are true!

She didn’t express it in a lot of words, but as the master of deception that she is, she made it crystal plain.

The account, known as Bombshell, sprang out of nowhere and began trashing Serwaa with slanderous charges.

Serwaa was accused of pimping out girls and having affairs with different politicians, according to the charges.

Kwame A Plus, who has recently been beefing with Abena Korkor, has joined into the conflict and blamed her for the charges.

Abena Korkor, he claims, is the brains behind the hidden snapchat account because she wants to smear Serwaa’s reputation.

She shared a video of herself on Instagram wearing revealing clothing and flashing nearly her entire body, as she frequently does.

The video was an Instagram reel with the song “Rumours” by Lizzo featuring Cardi B as the background music.

Korkor chose a specific section of the song to begin the video with: the line in which the rap says, “All the rumors are real.”

“What rumors have you heard about me?” she captioned the video.

You won’t find a cleverer admission than that.