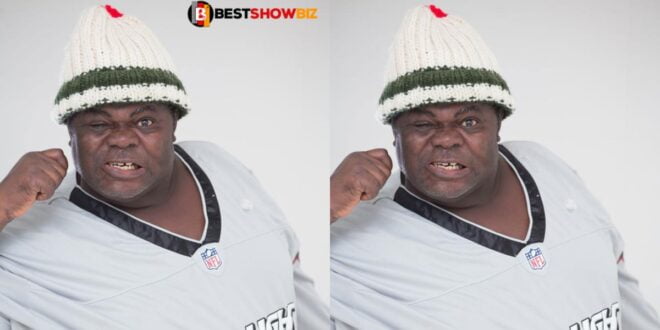 The actor has stated that he finds it demeaning and that he genuinely becomes enraged when people inquire as to what he has done with his money.

In an interview, TT hurled further obscenities at his detractors, referring to them as “ony3.”

Ghanaian actor, Psalm Adjetefio, also known as TT, has become unduly enraged and agitated when people questioned and condemned his habit of begging for money.

DKB has stated that it is shameful that TT comes out to beg for money on a regular basis. He has instructed him to put the money he has been given after coming out to beg into something productive so that he does not have to come back.

TT, on the other hand, thinks it is disrespectful. He has already cursed his detractors, pleading with God to send evil on their way.

He claims that he is currently bankrupt because he has had to spend all of his money on medical expenses related to his sickness.

Despite everything that has been said, TT is still dissatisfied. In another video, he can be seen attacking his detractors simply because they questioned him about how he spent his money when he was younger.

This came when TT asked for GHC 3000 in order to pay for six months’ worth of rent in advance.

Meanwhile, Dr Bawumia, Vice President of Ghana, has donated GHC 50,000 to the TT campaign. GHC 30,000 of the money will be used to cover his rent for the next five years, with the remaining GHC 20,000 going toward his upkeep.

Mr. Henry Quartey, Minister for the Greater Accra Region, has also committed to providing TT with GHC1,500 a month until the end of his term in office.