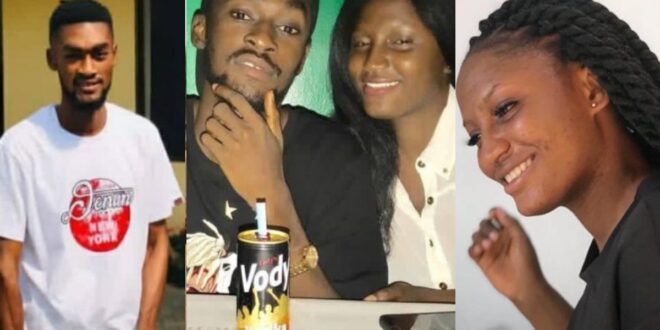 Young man who k!lled his girlfriend in volta and attempted to k!ll himself finally speaks

From Tuesday to today, the young man said to be a footballer Jay Dordorye, who assassinated his girlfriend, has been the most talked-about news in the country. Many reports about the death of Harriet Kafui, a young woman, have been circulated on social media, with theories as to what caused the Boyfriend to murder his fiancée.

This is really tragic, and many well-known figures have spoken out about it. Death is unavoidable; it is a period of life that everyone will undergo at some point. The void left by our loved ones is always difficult to fill, however we must allow them to rest in peace.

reports has it that, the boyfriend has shared more details into what happened and caused him to commit such a crime.

Talking to his mum, who had come to see him in the hospital, the boyfriend claimed that he had never tried to do something wrong or harm his girlfriend before. He was coming out during their fight when someone pulled him around, assuming it was his girl. He turned around and realized she was not the one.

What he recalled was that something had invaded his body and that before he knew it, his girl was bleeding on the floor. He was scared and tried to commit suicide in order to be with his girlfriend, but against his best efforts, he was unsuccessful.

This information was disclosed by the mother after she was interviewed by Volta Radio about his son’s condition. She went on to say that she raised her son and has never seen him get enraged beyond measure, which leads her to believe that a spirit is acting against him. This unfortunate incident occurred, but she is certain that God will save his son.