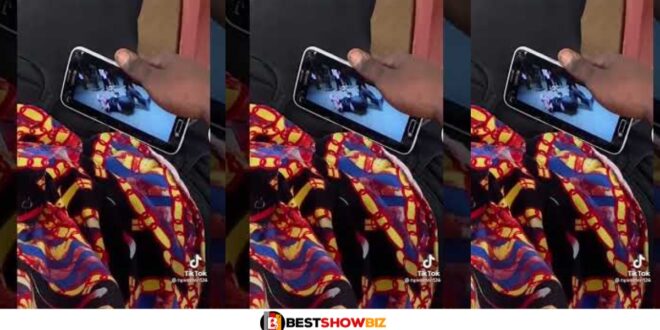 Men of God have always urged members not to use their phones when in the presence of God.

Some churchgoers show little regard for God or their religious leaders, as seen by their use of WhatsApp, Instagram, and Twitter while in church.

According to Ecclesiastes 3:1, “there is a time for everything and a season for every activity under the skies.” What this person was captured on camera doing in the church, on the other hand, shocked some who saw the film.

Looking closely at the footage, you can see a young man, possibly between the ages of 16 and 20, viewing a foreign movie while a church service was taking place.

Read Also  "God has called Akuapem Poloo, she will be an evangelist after her jail term" -Prophet Kumchacha

In the backdrop of the video, church chorus leaders can be heard singing praises as this young man watched an action movie, most likely a Chinese film.

Some churchgoers were even standing, clapping their hands and chanting God’s praises.

But this person has no regard for God, so he does not stand or participate in the praises by singing or clapping his hands.

Following the release of this video, some social media users stated that it is the responsibility of the church’s ushers and leaders to ensure that all members participate in all church activities.

Others have stated that the gentleman looks to be devoted to viewing movies, which is why he is at church, yet he still wants to watch a movie.