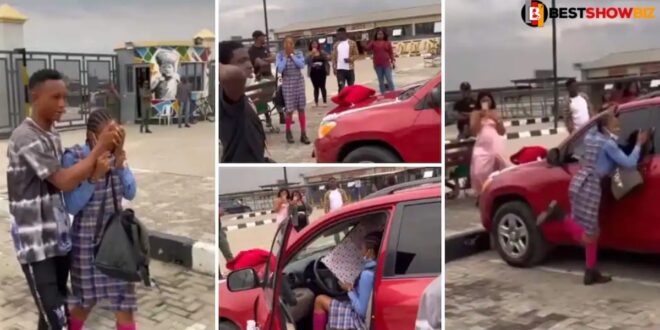 A teenage loverboy pushed his love for his lover to new heights in a viral near-perfect comedic act. The young man was shown in the video to surprise his girlfriend with a fresh new SUV automobile as a present.

The flawlessly filmed video was created by @debbydickson_, a rising Instagram phenomenon, and posted by @gossipboyz1.

Many people believe the video is real, according to Legit. ng, with many people criticizing the girl and her “boyfriend” who bought the car for her on social media.

Many people blasted the man for the gift, believing the child was too young to drive or own a car. Others questioned how the present would be received by the girl’s parents.

Read Also  Our relationship has ended in tears, Susana blocked me - Grandpa Of DateRush reveals

below the video below;