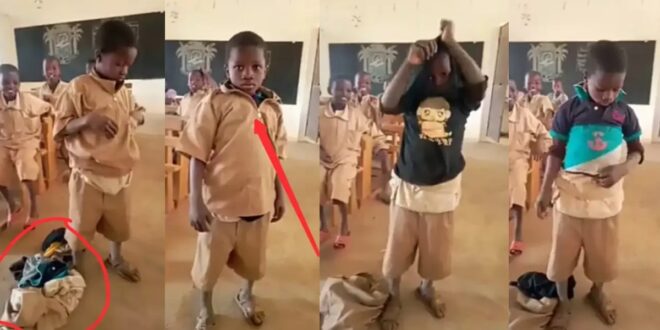 A young boy goes viral after he wore Multiple clothes to school to lessen the pain of lashes.

Gone are the days when we might hope to be scolded at school for being late or for some other infraction.

However, at the time, the students devised their own method of flogging management. We claim to be ill, recite a bogus incantation in the hopes of distracting the teacher, and dress in layers to lessen the pain of the flogging.

Then, just as I thought these tactics were only used by high school students, a video of a young boy demonstrating one of them surfaced on the internet recently. Follow along to see how many outfits he wore to school just to avoid being whipped.

Read Also  Sandra Ankobiah: ‘We Will Continue To Chop Life And Make Our Enemies Angrier’

The instructor caught the boy as he was asked to strip off a couple of the clothing he was wearing over his body in a new video that was just shared on the Internet. The kid who stood innocently in the video seemed to be a little obese at first. However, he started to remove the extra clothing he wore to school, giving him a greasy appearance. He removes the first, then the second, the third, and so forth, until he reaches the number six.

What may have caused the boy to dress in too many different outfits? is simply the terror of receiving a spanking from the instructor. The boy had to put on too many clothes because he had done something bad at school and was awaiting retribution. However, after seeing the footage, some people believe that teachers are to blame for students’ bad behavior because they flogged them too often.

Others have plainly claimed that the kid is obstinate and already understands what is going on. Others actually blame the parents for allowing their children to wear too much clothing. Take a look at the comments below.