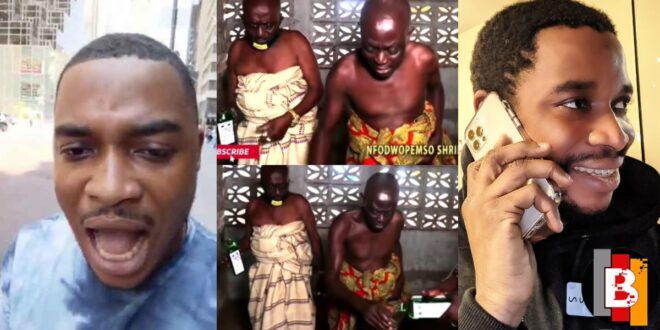 “you should have eaten the eggs and meat used to curse me for protein, stop f*0ling”- Twene Jonas

Twene Jonas, a social media personality, is still replying to numerous people cursing him in a live video that is gaining more views online.

Twene Jonas’ attack on Ashanti Royal Otumfuor Osei Tutu II after he (Otumfour) spoke about his awareness of those involved in galamsey has gotten a lot of attention on social media.

Instead of thinking about how to get oneself employed, he claims, folks who buy various things for sacrifice to curse him.

He made a live video on Instagram during his responses to critics, which was watched by over 9000 people.

This implies that many Ghanaians agree with whatever he has said, especially when it comes to blasting Ghanaian Chiefs for allowing unlicensed miners to harm their community’s water bodies and forests.

After several water sources were destroyed in the country under the name of seeking for gold, illegal mining (galamsey) has become the country’s major concern.