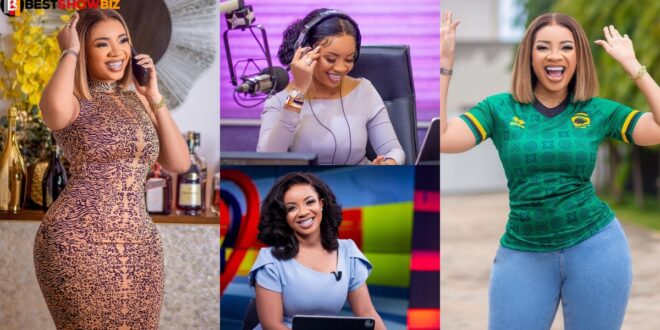 Serwaa Amihere published n post criticizing men who do not want to work and rely on wealthy ladies for a living.

You don’t deserve to call yourself a man if you live off the hard labor and sweat of a woman, according to the television news anchor and slay queen.

She went on to say that these gold diggers are aware that their wives do not have the resources to provide for them, yet they shamelessly demand money from them.

It appears to be a disgrace in the eyes of society for a man to rely on a woman when he knows for certain that she does not have, but the opposite scenario described above is strongly advised even by the Christian Bible.

Read Also  No woman is a Gold Gigger, find the one in your price range - Kenyan Socialite

Women are taught from birth that they are incapable of self-sufficiency and must rely on the sweat of males to thrive.

Woe betide the man who is unable to care for his wife. He becomes a family laughingstock, and his wife may even cheat on him with a wealthy man.

Serwaa Amihere chose to speak up for her gender, calling out guys who extort money from them.

Some males rushed to her comment area to express their disgust with her bias.

They resurrected allegations that she was supposedly living off the sweat of wealthy men and that her income was not the result of her own hard labor.

Serwaa Amihere just allowed herself to be dragged on social media once more with her tweet. The comments that came with it were not pleasant because she chose to ridicule guys who survive off a woman’s sweat.

Whatever the case may be, both men and women are guilty of this conduct, but it appears that in recent times, the women have grabbed center stage, outdoing the men at their own game.