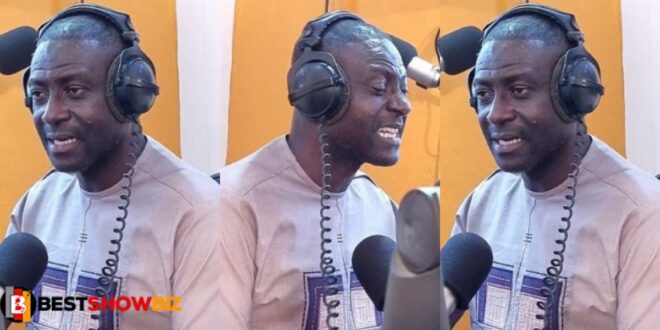 Following rumors that the Western Regional Minister, Kwabena Okyere Darko-Mensah, is planning to sue Captain Smart and fine him for speaking out against him on his live show about the kidnapped pregnant woman from Takoradi, Captain Smart has finally spoken.

Captain Smart, commenting on the subject this morning on Onua Maakye, stated that he still stands by what he said on Thursday and that he will never retract his statements.

Smart stated on his program, which was broadcasted and monitored by Bestshowbiz.com, that the Regional Minister has the right to take him to court if he so desires because he does not recall saying anything negative about him.

As reported by the former Angel TV presenter, the Western Regional Minister, Kwabena Okyere Darko-Mensah, and his staff gathered to discuss how to use the things he spoke against the Regional Minister to sue him.

According to Smart, the good news is that God provided him with one person among them who phoned him during the meeting and requested that he refrain from speaking and only listen to whatever was going on.

Captain Smart said on the show that he overheard them discussing how they wanted to do all they could to sue him in court.

When pressed further, he asserted that they should take him to court if they so wanted, asserting that he’s no coward and that he still stands by what he stated on Thursday.

Captain Smart stated that he was only concerned about the Western Region is a center for kidnapping and that the police should devote more time and resources towards this issue rather than bothering about the pregnancy gripes.