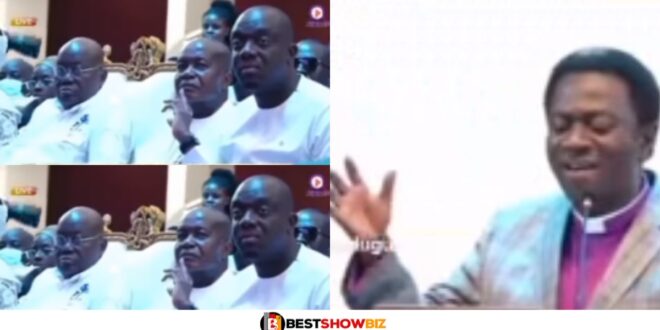 A startling new video has emerged on social media showing a preacher confronting those in authority while an astonished crowd cheers him on.

The film depicted embarrassing situations in which the President of Ghana and a few members of his cabinet appeared clearly irritated.

In his opening words, the preacher leveled an accusation of hypocrisy at the current administration for claiming, They have the men to change the economy.

It is impossible for a government to function properly, as stated by the pastor, if it possesses capable persons but lacks unity within itself.

The domino effect of such a terrible occurrence can only mean that the government and the people of the affected country would both be negatively affected.

While the congregation applauded the pastor, Nana Addo Danquah Akuffo-Addo maintained his serious expression, indicating that he was not happy.

The camera then panned across to reveal the displeased expressions on the faces of the top officials in the government.

Watch the video that is provided below.

The pastor said, “You called the wrong person to speak,” fully aware that what he had done generated a stir in the congregation.

The reactions of internet users have been somewhat varied as well.

Take a look at some of the comments down below.