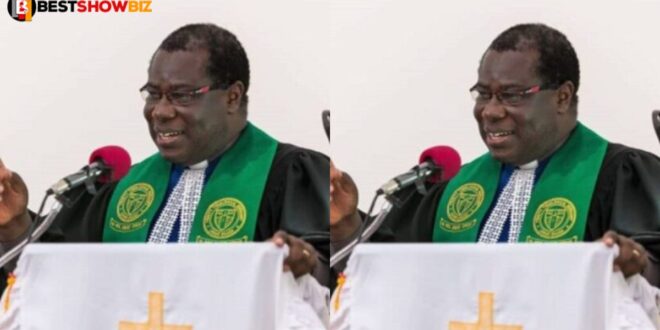 “You are W.!tch if you are not happy with the 111 hospitals Akuffo Addo is about to build”- Moderator of the Presbyterian Church Ghana

The Moderator of the Presbyterian Church’s General Assembly, the Rt. Rev. Prof. Joseph Obiri Yeboah Mante, has declared that anyone who opposes the construction of the 111 hospitals is a witch.

While speaking at the inauguration of a Presbyterian hospital in the Central Region, he referred to opponents of the project as witches who were out to destroy the government’s efforts.

He is alleged to have said the following:

The Rt Reverend did, however, call on the administration to remain focused and dedicated to seeing the project through to completion in order for it to become a reality.

President Nana Addo Dankwa Akufo-Addo formally broke ground on the first of the 111 hospitals and healthcare facilities he promised during his inauguration speech last month in Accra.

According to the president, when the 111 projects are completed in 18 months, they will result in the creation of 20,000 new jobs for healthcare workers in the country.

Because the Ministry of Health will be concentrating on recruiting additional doctors, nurses, and pharmacists.