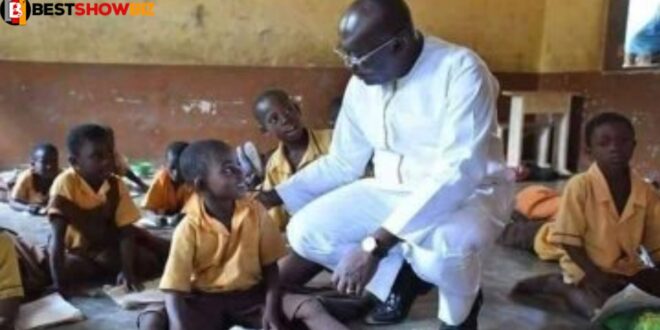 Vice President Bawumia is back in the news, this time for a photo in which he is kneeling in front of students who are studying without a desk.

The snapshot depicts how some schools in rural Ghana are struggling to provide basic amenities such as a desk, a proper classroom, and a consistent supply of teaching and learning materials.

Many people say Bawumia’s decision to kneel in front of the students to sympathize with them demonstrates how the politician is aware of the country’s problems but has failed to address them.

Meanwhile, many have objected to Ghanaians’ reaction, claiming that the photo was shot long before the New Patriotic Party took power in 2016.

According to reports, a newspaper claiming to be from GhanaWeb used the identical image to present a story about Bawumia donating desks to students at Kperisi in Ghana’s northern region.

While these explanations appear to be helpful, some Ghanaians say the government has not gone far enough to shift schools from beneath trees to classrooms and to give the resources needed to support teaching and learning in the country.

This is related to the #FixTheCountry hashtag, which has been trending on social media for the past month.

Prof Stal wrote: Ah, but this photo is from a long time ago. At the time, he was not even a Vice President. Delete, Charlie. No, you do not have to do everything on your plan. What is this, exactly?

Biitka wrote: This photo is ancient; when he visited the school, it was furnished with desks…. That happened in 2016 or 2017…

Ghana Ba said, “Show us a picture of the furnished classrooms before you come here and say something you do not know about!!”

Edudzi wrote: I was not even embarrassed to ask for a picture with the kids. Smh.