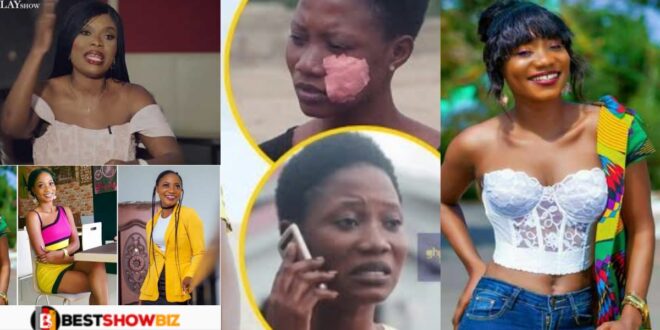 “You are lying”- Delay tells Maame Esi after she claimed she had 10 taxis, 25 acres of land, and a 6 bedroom mansion (video)

Deloris Frimpong Manso, better known as Delay, has built a name for herself as one of the country’s most forthright presenters, and her latest interview with comedian Maame Esi Forson seemed to back up this assertion.

Delay did not mince her words in the said interview with Maame Esi Forson on the popular ‘Delay’ show, pointing out that the Takoradi-based comedian was lying when she claimed that she built her six-bedroom mansion, purchased about ten taxis, and other lands with money from a restaurant she had been running.

“What were you selling at that restaurant?” said Delay, who was taken aback by the 24-year-old actress’ claim that she acquired all of the assets she had been talking about with profits from only operating the restaurant.

Maame Esi reacted to the query by noting that she used to get a lot of orders from Takoradi businesses.

“My current manager is a businessman, so I got some links and advise from him,” she continued. He introduced me to a few businesses. I could provide 200 people every day from various companies. One plate of meals costs GH30, and I made a GH10 profit each plate.”

Despite the fact that there is no way to refute Maame Esi’s assertions without counter-evidence, Delay assured her before signing out that she had done her research on her and had seen through all of the lies she told her during their interview.

Below is a video of that interview.