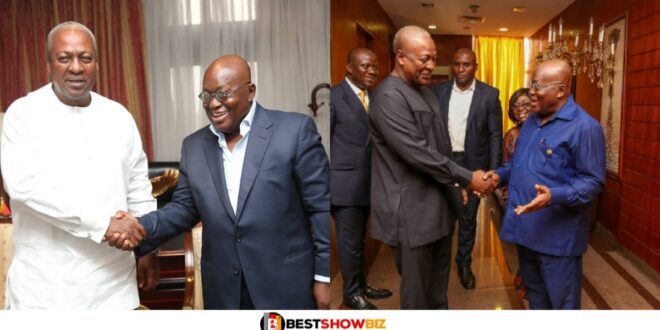 The fact that the president is currently pleading with the IMF for a loan makes Mahama laugh at Akufo-Addo’s warning to other African leaders to stop begging.

John Dramani Mahama, who served as president of Ghana before Akufo-Addo, has expressed his amusement at the latter’s advice to African leaders that they should stop begging.

Yesterday, the President of Ghana issued a stern warning to other African leaders, telling them to stop begging and instead invest their own money in order to improve the continent’s economic situation.

He was of the opinion that if African governments stopped begging for money, then people around the world would respect Africa.

On the internet, users have voiced their disagreement with Ghana’s president’s advice.

One of these reactions comes from the Nigerian political activist Senator Shehu Sani, who posted the following statement on Twitter:

“Ghana’s President is collecting IMF loans with the right hand and using the left hand to warn African governments against begging the west for money.”

John Mahama, a former President of Ghana who is now the opposition leader, cited Shehu’s tweet and appended a monkey face emoji to it.