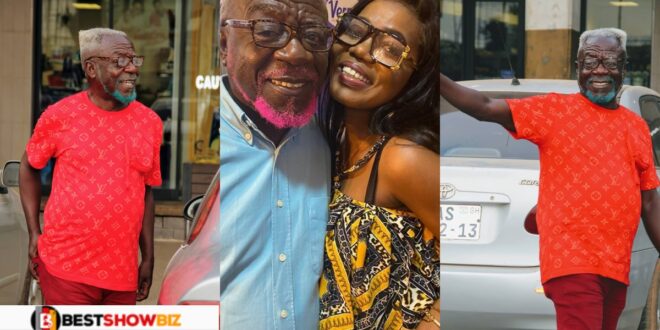 The Kumawood star has recently claimed that he despises the Ga language as well as the people who use it.

Fredyma, who was offended by his statement, has given him a post-it note.

He emphasized that what an elderly man like Oboy Siki spewed lacked wisdom.

Oboy Siki’s behavior, according to the popular music producer, is similar to that of Oboy Siki, who throws superfluous jabs in even some of his films.

Fredyma also questioned Peacefmonline’s editorial guidelines after they published such a sloppy statement from Oboy Siki.

He wrote: “WHEN WISDOM LEAVES AN ELDERLY MAN.
With my prying eyes on the social media front, i came across this story on Facebook and was, dumbfounded. What? My analysis is based upon the video i watched. Maybe, the conversation started somewhere before the question “do you speak Ga” came about before he gave that gibberish answer.

“This elderly man, Oboy Siki(De Santos) an actor, is fond of throwing invectives, uncouth behavior on radio, tv and social media. In some of the movies he acts, he sometimes jab unnecessarily thinking it’s from the scripts but, it’s a habit that he has cultivated.”

Fredyma added: “For him to say on live radio when the host on Neat fm entertainment review, Ola Michael asked him a harmless question “do you speak Ga” and for him to respond and insult all Gas in that manner, was uncalled for. He described them in a very despicable, hatred way and maligned them unapologetically. Shame on you Oboy Siki. You don’t have scruples.

“In this age, instead of preaching peace and harmony, you describe a whole group of people who haven’t attacked you in such derogatory manner. But for my in laws being Gas, i Fredyma, would have been nobody. It was my mother in law, a Ga, and my wife whose contributions in my life over the years, has made me who i am. They accommodated me. I cannot dictate to the editorial policies of Peacefmonline but in such a situation, they should decipher. The Gas are good. Oboy Siki, shame on you! Panyin…..”