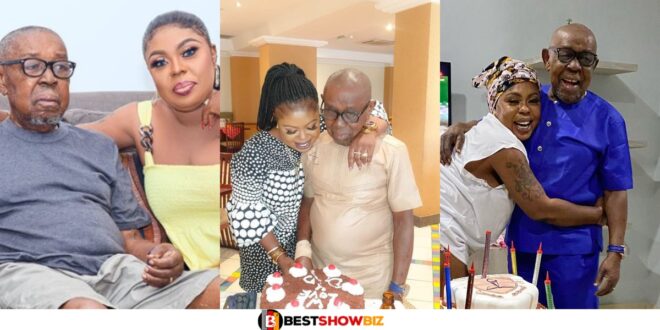 “You always insult people and want God to heal your father?” – netizen blast Afia Schwar after Crying to God to heal her Sick Father

Afia Schwarzenegger was slammed on social media after she prayed to God to save her ill father.

According to the individual, God would not listen to Afia Schwar after she insulted the entire country.

The comedienne broke down on social media this morning after discovering that her ailing father is on his deathbed.

Schwar’s father has been battling cancer for quite some time.

She’s been providing regular updates on his status, and from what she’s said, he’s just getting worse.

She issued her darkest warning yet earlier today, saying she no longer recognizes the man sleeping in her house as her father.

Read Also  "Dr. UN wants me to abort the baby, he is not picking my calls"- Pregnant SHS girl speaks (video)

“I miss my healthy, funny father… the man on this bed bears no resemblance to my father. “God help us,  ” she wrote.

Her colleagues chimed in to wish her luck and pray for her father.

One social media user, however, refused to spare her.

According to this individual, Afia has insulted everyone in Ghana and hence cannot expect God to listen to her prayers.

“You dey insult people no, now you want help from God?” “Biribi gyigyi wo,” said the person.

Others soon leaped on him to retaliate for being insensitive to Schwar at such a critical juncture.

Take a look at the interactions below…