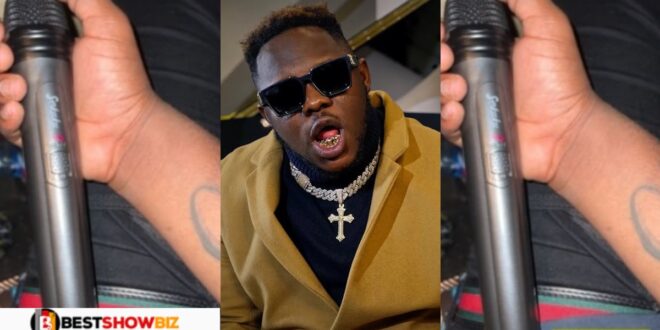 Yawa: Medikal steals microphone to his house from the show he was performing at.

Even though he faces charges for his acts on social media, AMG Medikal continues to display his tenacity.

After spending a few days in jail for something he wrote on the internet, you would think the rapper would be more cautious about what he posts today.

However, Medikal’s arrest for flashing a gun online does not appear to have made him more cautious.

Medikal admitted to stealing in a recent post that he meticulously designed to attract attention.

The rapper claims that he performed at a gig and did so brilliantly that after he was done, he stole the microphone.

He posted a photo of himself with the reportedly stolen microphone.

Medikal wrote: “You know the show was lit when you steal the mic,”