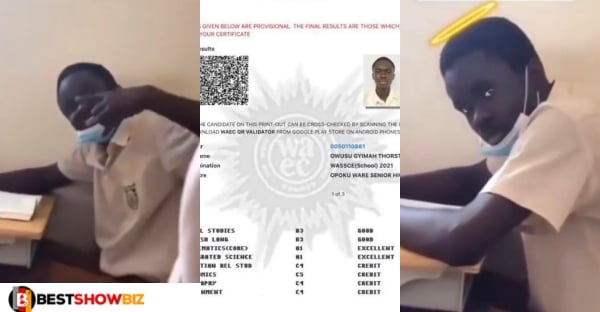 The entire WASSCE results for VGMA award winner Yaw Tog have finally been released, and they aren’t as horrible as he had us believe.

Tog took the WASSCE after graduating from Opoku Ware Senior High School (OWASS) in Kumasi, as is required of all pupils.

He made a lot of commotion after finishing, but when the results came out, he confessed that he wasn’t pleased with what he saw.

Tog turned to social media on Thursday, December 9th, to express his fear after discovering his results.

Read Also  A hunter accidentally shot his neighbor, whom he mistook for an animal.

According to him, he just verified the findings and had the surprise of his life!

“I just checked my results na meyam koraa ahye me,” he added.

‘Meyam ahye me’ is a twi phrase that means he was entirely taken aback by what he witnessed.

This sparked unending discussion over whether he had passed or failed, and some phony results were even issued.

Yaw Tog’s genuine findings, on the other hand, are now available and seem significantly better than he led us to believe.

Not the best, but far from a flop.

Read Also  He was full of life: Throwback video of TB Josuah displaying his dancing moves pops up

Yaw Tog’s grades were only ordinary, and he may easily continue his studies if he wants to.

Check out his complete results here…