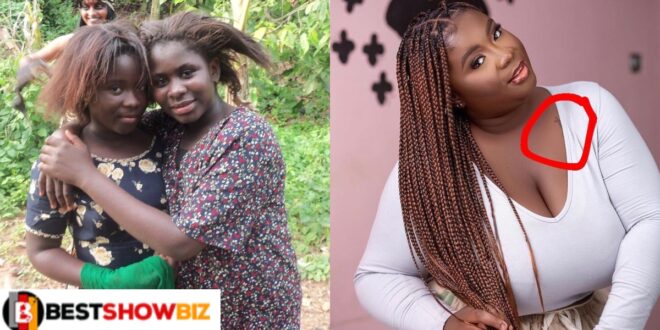 Social media is in shock after learning that Maame Serwaa has gotten a new tattoo!

Maame Serwaa is the last person anyone expected to get a tattoo, but she has a new one that has been spotted online.

A photo of her appeared online in which she was attempting to conceal the tattoo, but it was still visible.

Maame Serwaa has the tattoo on her massive God-given chest, which is hidden by her dress.

However, a small portion of the tattoo was visible beneath the dress.

People were shocked to see that from Maame Serwaa of all people.

According to social media users, Yaa Jackson has probably taken her under her wing and is teaching her the ways of the dark.

Mari Gyata, the blogger who shared the photo, raised the issue.

Other social media users, however, were not compelled.

According to one source, Maame Serwaa got her tattoo before Yaa Jackson.

In any case, it’s now causing quite a stir.

Check it out below…