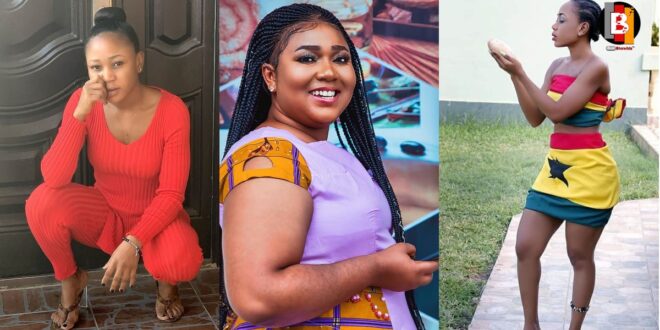 Xandy Kamel: “I Cursed Akuapem Poloo And Will Curse Anyone Who Messes With Me”

Kumawood actress Xandy Kamel in the latest interview has threatened anyone who has bad intentions towards her – says such people should withdraw else suffer her curses.

The Kumawood star who was speaking in an interview with Fiifi Pratt on Accra-based Kingdom Plus FM went ahead to stress that she cursed Akuapem Poloo for spewing lies about her and would not hesitate to do the same to anyone who dares her.

Recalling last year in July, Xandy Kamel and the video vixen engaged in some oral feud in which the latter alleged that the Kumawood actress is a beggar who shameless went to beg the father of late Ebony reigns for an iPhone x max.

Xandy eventually reacted to the allegations by invoking curses on poloo using Krachi Dente and cleared the air that she had never spoken to Starboy Kwarteng (Ebony’s father).

Well, Xandy Kamel has this time decided to use curses as her last line of defense against anyone who lies against her. “People are in the prison because of false allegations leveled against them,” she is reported to have said. “Anyone who tries to paint me black in the faces of people will face the wrath of the gods”.

She further indicated, she will never go to court to seek justice especially when she can take things into her own hands.