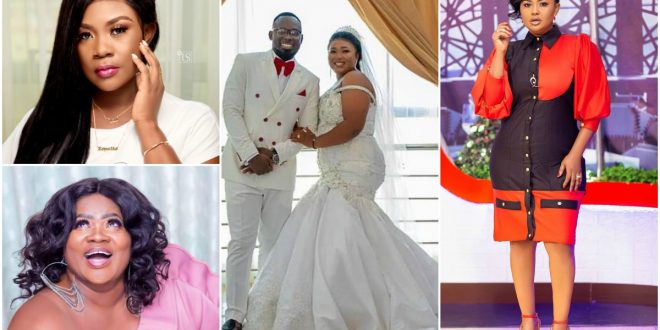 Xandy Kamel ignored by most Nana Ama Mcbrown, Emelia Brobbey, and others on her wedding

Most Kumawood stars have decided to give death ears to the news about Xandy Kamel’s wedding as they refused to congratulate her.

Ghanaian actress and TV personality Xandy Kamel got married traditionally to a colleague presenter of Angel TV, Kaninja, and is causing a lot of raised eyebrows on social media with pictures from the ceremony.

Most Ghanaians are pouring on the actress’s social media pages with their congratulatory messages as is done usually. on the other hand, most of her colleagues from Kumawood seems not to care about what is going on.

We took a stroke through comments on her photos and it’s only Tracey Boakye, Kisa Gbekle, and Tima Kumkum who have congratulated Xandy Kamel.

The rest of the Kumawood actors and other celebrities have ignored her at the time of this report.