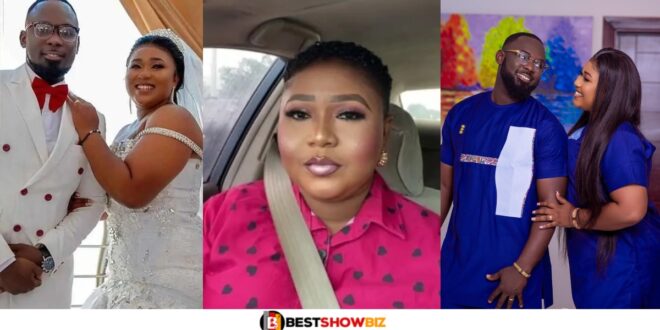 Actress and TV host Xandy Kamel has insulted online trolls who make fun of her for supposedly spending all of her money to marry her ex-husband Kaninja.

Following the split between Xandy Kamel and Kaninja, rumors spread that she was the one who fully funded their wedding because the sports presenter wasn’t ready to wed her.

Xandy Kamel told Afia Tamakloe in an interview that she regretted paying for part of her wedding to Kaninja.

Xandy Kamel must be sick of being made fun of all the time because he has started swearing to stop the rude comments for good.

In a recent video that she just posted on her Instagram page, Xandy Kamel called upon the God of Thunder to deal harshly with everyone spreading false information about her broken marriage to Kaninja.

Xandy Kamel, who was in pain, said she now believed that people only attacked her to feel good about themselves, and she wouldn’t put up with such crap ever again.

She called her opponents big-time idiots who should look into their finances before talking badly about her online.

Xandy Kamel firmly states in the curse-themed video that she never spent all of her savings on her wedding, despite what a bunch of dishonest and evil people have spread online.

Since her adversaries had made the decision to continue being hostile, Xandy Kamel wished 10 times as many bad and evil things for them in the next few days.

Read Also  “I Know I’m Handsome But It Doesn’t Pay The Bills, so I dress like a woman”- James Brown