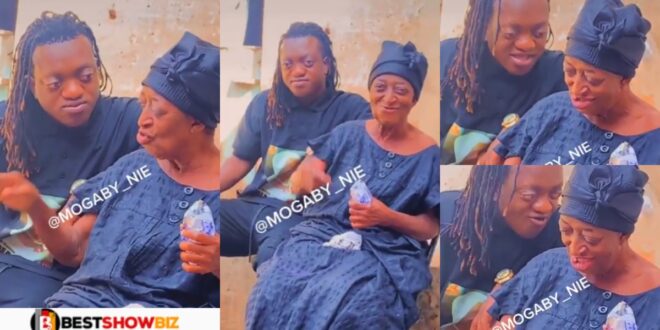 Wow: “They have the same eyes” – netizens react to sumsum Ahoufe video with his grandma

Yaw Adu, also known by his stage name as Sumsum Ahuofedua, a popular Kumawood actor, has touched the hearts of people all over the world when he shared a video of him and his grandma on social media.

According to a video seen by bestshowbiz.com on the actor’s Instagram profile, Sumsum Ahuofedua can be seen seated in front of a chamber with his grandmother.

It seems that someone was filming them when the grandma and grandson were enjoying a spirited talk.

His grandmother, who was grinning from ear to ear, could be seen seated on the right side of the bed, with Sumsum Ahuofedua leaning in close to talk into his granny’s ears.

The startling likeness between the two, on the other hand, attracted many people’s attention and added a tremendous payload of charm to the video overall.