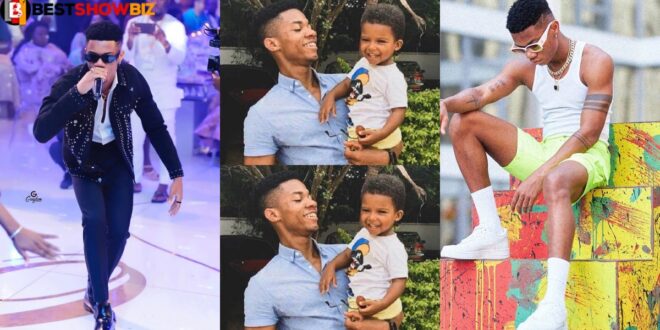 Would you ever marry a born one lady? Here is Kidi’s answer

Dennis Nana Dwamena, well known in the music business as KiDi, a signed artiste with Lynx Entertainment Record Label, has expressed his doubts about marrying a woman who already has a kid.

The interviewer, Amansan Krakye, shifted the line of questioning during the healthy interview to inquire about KiDi’s present relationship situation and his thoughts on single moms.

At this moment, the ‘Say Cheese’ singer was asked if he planned to marry a woman who was not his biological mother someday.

KiDi’s reaction was disappointing since he could not give an honest answer to such a straightforward issue.

Many listeners to the Central region’s most respected entertainment broadcasts are left perplexed and dissatisfied.

Take a peek at KiDi and Amansan Krakye’s discussion about marrying a woman who has a kid with another guy.

KiDi, will you most likely marry a woman who already has a child? Amansan:

All of this is not black and white. KiDi: You may meet someone with whom you have a strong bond, spend time with them, and believe that they are the one with whom you will most likely end up.

Amansan: For the sake of my valued listeners, could you please provide me with a more detailed response?

KiDi: It is just a matter of me believing that this is the life I want to live. I’d rather keep my child out of the spotlight, so I’ve kept him away from it.I do not want him to go through what I went through.

Several callers to the show had conflicting feelings about the ‘Adiepena’ hitmaker’s ambiguous response.

KiDi will not marry a woman who has a kid unless the heavens intervene, according to the conclusion of the passionate interview.