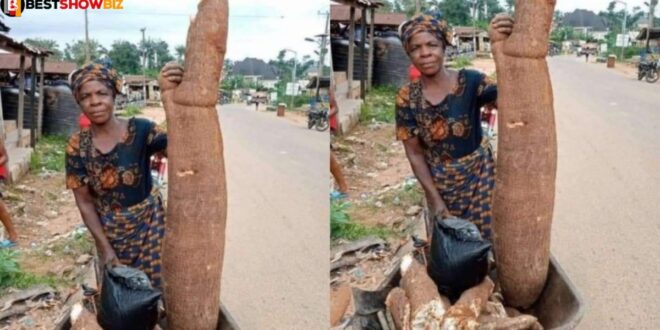 wonders: 55 years old woman harvest cassava the size of a human in her farm (photo)

After a 56-year-old woman spotted a peculiar cassava tuber in her field, a farming community in the Bono Region was taken aback.

According to community members, the 56-year-old woman spotted the unusual cassava tuber while harvesting cassava on her property.

Residents are taken aback since they have never seen such an unusual cassava before.

Some have described it as the largest cassava they have ever seen, and as a result, they are baffled.

While some people see it as having mystical significance, others believe that such a cassava was discovered by chance.

Although this type of cassava is common in several African countries, such as Nigeria, it is not found in Ghana.

With the use of genetically modified organisms, scientists have created a plethora of cassava types.