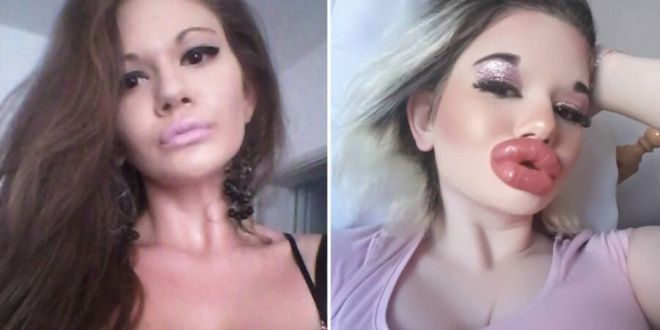 Woman with the biggest lips in the world, Andrea Ivanova

Who is Andrea Ivanova?

Andrea Ivanova is a socialite, singer, Tiktoker, and internet personality from Burgas, Bulgaria. She is currently 24 years old and has spent the majority of her adult life fashioning herself into the “Balkan Barbie.” Ivanova boasts of having the “biggest lips in the world” thanks to the 26 lip injections she has received.

Andrea Emilova Ivanova was born in Sofia, Bulgaria in 1997. She studied at the St. Kliment Ohridski school of the University of Sofia. According to Yahoo News, she attended the country’s first and oldest university, where she majored in German philology, demonstrating an early and sustained commitment to the study of language and its history.

Before 2018, Andrea’s lips were normal. Notwithstanding this, by the time she was 22 years old, body alteration had become increasingly mainstream, and she found that she was increasingly curious in it.

She did a lot of research and went to a lot of different doctors in order to locate the right one. in an interview, she revealed that she had undergone 26 procedures to have her lips filled in. She underwent her 27th operation over the holiday season of the last year.

Ivanova is determined to realize her dream of having the “biggest lips in the world” and also looking like a Bratz doll, despite the advice of her doctors that more surgeries pose a significant risk of death.

Today, she has accumulated more than 21,000 followers on Instagram, in addition to thousands more on both TikTok and OnlyFans.

Tags biggest lips in the world