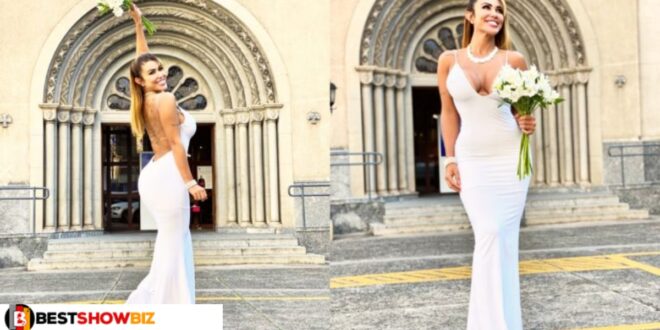 Woman who got married to herself divorced 3 months later, claims she has met someone

A Brazilian model and influencer who tied the knot with herself in September 2021 is expected to divorce herself less than three months later, according to the latest reports.

Recently, model Cris Galera, 33, made headlines when she became the first person in the world to officially marry herself. During the time of the photograph, she was dressed for a wedding and posing outside a Catholic church in Sao Paulo, Brazil.

Read Also  “Ghana Is Not A Serious Country; How Can Afia Schwarzenegger Be Considered A Celebrity?” – Journalist Albert

At some time, I realized that I am a strong and resolute woman and that I had attained a certain level of maturity.

My fear of being alone persisted, but I eventually came to the realization that I needed to learn to feel good about myself.

“When that happened, I decided to have a party to commemorate it.”

Apparently, she is divorcing herself barely 90 days after the wedding because she is beginning to fall in love with someone else, according to reports.

Cris expressed her happiness throughout the divorce by saying, “I was happy while it lasted.”

“However, it was after I met someone special that I began to believe in love.”

Read Also  "I chopped my wife very well on our wedding night, she moaned hard. People thought I was beating her" – Bro Sammy
Share