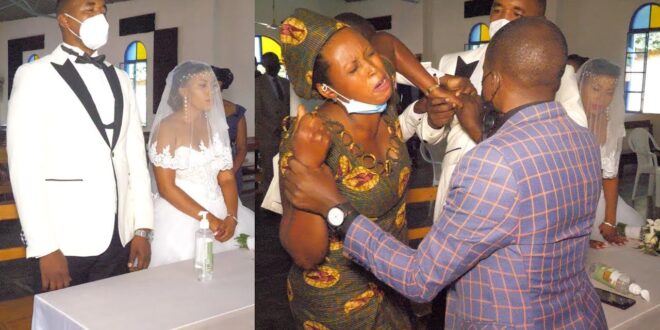 An unusual image was witnessed in a Rwandan Apostolic church when a woman rushed the premises with a group of media personnel in order to disrupt her husband’s wedding reception.

The woman, who was the mother of the groom’s five children, promised she would not allow the wedding to take place and worked tirelessly until the event was called off.

Dukuzumuremyi Janvier created quite a ruckus as she went into the building with her young children, which included a set of twins who she had been caring for on her own.

While she was being interviewed, she received a phone call informing her that her husband, despite the fact that they had been separated for years, was getting married to another woman without her knowledge.

Read Also  "Abesim murderer has hired an international lawyer, and he is supported by pastors and politicians." – Popular pastor reveals (VIDEO)

As devastated as she appeared to be, as captured on video, she invited the press to her home to observe how she dealt with the situation.

When she arrived at the church, the Afrimax cameras were still recording her every move, right up until the moment she stepped foot inside the building.

As soon as she entered the church, she avoided any confrontation with the bride, preferring to target her dissatisfactions toward her husband.

The guys had to calm her down before she could tell the story of her ordeal to the priest performing the wedding.

She backed up her accusations with evidence, splattering images from their wedding and private lives all over the couple’s table, while the bride stood by and looked on in disbelief at the spectacle.

Read Also  "Don't compare me to Moesha, she has her life and I have my life"- Hajia4real angrily blast interviewer (video)

The officials were obliged to convene an emergency meeting, during which the topic was discussed and a resolution was reached on the matter.

The discussion came to a close with the recommendation that Janviere divorce her spouse because he was resolute about never returning to her. With the condition that he provide for their five children, she consented to his proposal.

Even though her spouse complied, it was too late to preserve his newlywed marriage. It was decided that the wedding would not take place because of the cancellation of the officiants.