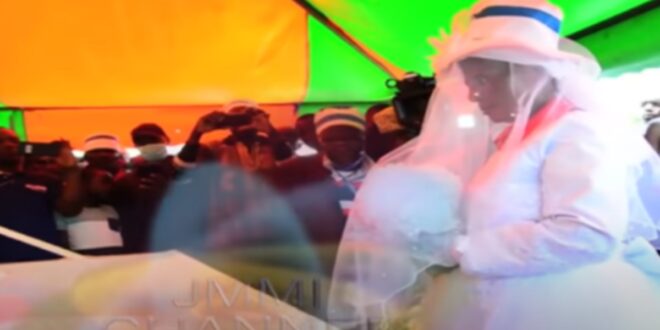 Woman marries her dead husband before he was buried

When a woman known as Beatrice Mbayi married her late husband William Godfrey Mukalama in Funyula Busia County, many people were surprised.

Beatrice is considered to be a follower of Prophetess Mary Akatsa, who leads the controversial Jerusalem Church.

She had to conduct the first wedding service for her late husband before he was laid to rest, which shocked all of those in attendance at the funeral.

Beatrice, dressed in a white robe, was escorted by several female church members dancing towards her late husband, who lay in a casket.

The ceremony was officiated by a man who also aided the bride in putting a ring on the late’s finger as a sign of their union.

They then began the burial ceremony after the wedding ceremony was finished.

some of the events now taking place under the sun are incomprehensible to humans.