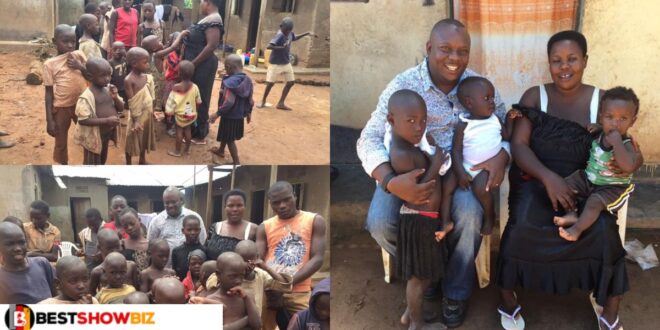 Mama Uganda, a woman, has given birth to 44 children from a single man without the need for any special medical procedures.

She is claimed to have begun childbearing at the age of 13 after her parents married her off when she was 12 years old.

The 40-year-old Ugandan woman is now a single mother after her husband abandoned them and vanished with all their money.

According to a video uploaded by explorer Joe Hattab, Mama Uganda has been left to care for 38 children after six of them died.

According to her, a generous Arabian donated the bunk bed on which her children sleep, and she has since been able to enroll all of her children in school.

She went on to say that physicians told her she was exceptionally fertile, which led to her huge childbearing because she only delivered one child and the rest are twins, triplets, and quadruplets.

She has 16 daughters and 22 boys who are still living, and no kind of family planning has worked for her.