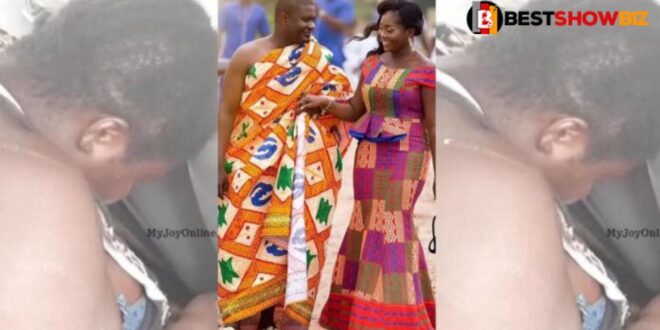 Kasoa New Market Police have detained a lady for allegedly stealing engagement outfits in Kasoa Down Town in the Central Region.

According to sources, the woman, who is thought to be in her late 40s, also took clothes and things from five separate houses in the area.

One of the victims whose belongings were stolen, Elizabeth Akoto, expressed surprise at how the suspect gained entrance to their locked room.

She told Adom News, “The engagement clothes belong to my later mother; my father had locked them in his room.”

“Because my father had locked and hidden the key somewhere, I inquired as to how the suspect opened the door. She merely stated that she got it from his hiding place.”

They are concerned, according to Elizabeth Akoto, because no one has ever seen the suspect in the area and no one knows her.

“When we saw her, we felt compelled to examine the contents of the sack she was carrying. She stated, “We found our clothes, laptop, and charger, as well as about 20 different keys.”

The suspect, however, denied removing anything from the house before being transported to the police station.