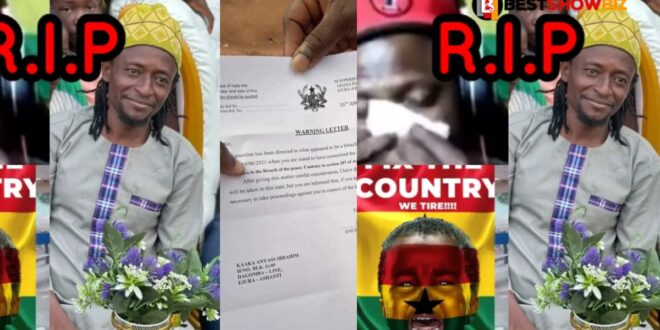 Wife of #fixthecountry Activist Kaaka, boldly shows the warning letter sent to her husband before he was murdered.

When Mohammed Kaaka’s widow proudly exhibited a secret letter written to her murdered husband, who was a member of the FIX THE COUNTRY GROUP, she cried hysterically.

The letter, she claims, was sent by the District Police Command, telling her husband that if he did not stop running for the final time, he would be arrested and prosecuted.

After other suspected NPP members, including DCE Mohammed Bamba, denounced him to the police for violating various constitutional requirements, he was arrested.

The police advised him in the letter, which was presented to his wife, not to cause fear and panic. He should, once again, refrain from infringing on the public’s tranquility.

According to the woman, her husband got several death threats via text messages and phone calls a few days following the police warning. Her spouse had to report it to the police right away.

Unfortunately, a crowd attacked them and rushed on her husband, stripping him nude and thrashing him. He could not bear the anguish any longer and died in Kumasi’s Komfo Anokye Teaching Hospital.

The secret letter has yet to be discussed by the Ghana Police Service in Ejura.

Take a look at the letter below.