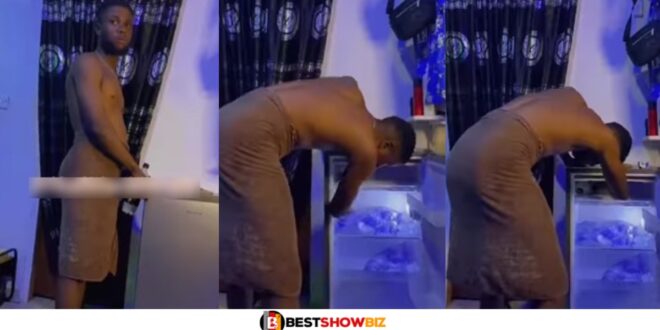 A viral video shows a man being made fun of by his girlfriend for stocking his refrigerator with sachet water, often known as pure water.

She asked him why he only drinks pure water instead of other beverages like soft drinks and liquor, as she recorded him pulling one sachet out of the refrigerator.

He gave her a severe look when he realized she was being playful, which effectively implied that he wasn’t pleased with what she had said.

Her boyfriend questioned what was wrong with her and then said that water is life and alcoholic beverages are bad for the body.

They both had a discussion on the advantages and disadvantages of drinking water as opposed to juices and other beverages.

Read Also  "I Will Never Fight Over A Womaniser, Bring Me The Divorce Papers If You Are A Man!" – Xandy Kamel To Husband (+VIDEO)