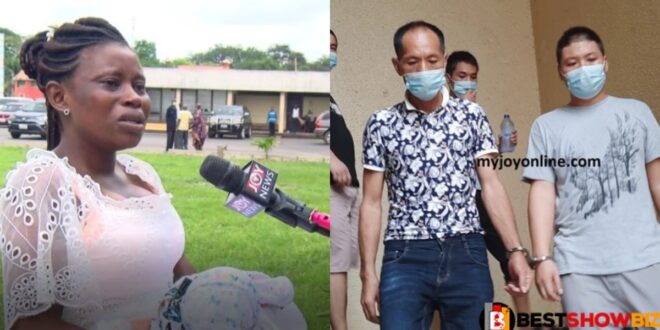 When the Ghanaian wife of a convicted illegal Chinese immigrant stormed the court building in Kumasi with their children to ask for leniency, there was drama.

Lan Hai Song’s Ghanaian mistress appeared in court with three children, including a four-day-old baby, to ask for leniency for the criminals who were about to be returned to Kumasi Central Prisons.

“In the unlikely event of his deportation, how would I and my children survive?”

Ghanaians need to come to my rescue. She shouted out, “Who will look after me and the children?”

The deportation comes as the government has declared war on illegal mining in forest reserves and bodies of water, deploying a military taskforce in a special exercise code-named.

After an absconding warrant was issued by the Kumasi High Court, presided over by His Lordship Justice Emmanuel Senyo Amedahe, the Chinese nationals and a Ghanaian collaborator, Asamoah Kati, were captured.

They were apprehended while gold-mining on the 40-acre land of the Obuasi-based Seidu Fanzia School under the protection of armed guards.

When Rebecca Oforiwaa, 27, learned of the court’s rulings, she sobbed hysterically. She had been in a relationship with Lan Hai Song but got married under the Customary Law in 2018.

Read Also  "Giving your fans credit to vote for you to win awards is useless"- Kofi Kinaata.

She was afraid that deporting her husband, who had been the backbone of her family for numerous years, would mean doom for her entire family, particularly her children.

Even a High Court plea from a police officer failed to persuade Oforiwaa to reconsider her actions.

She wailed uncontrollably until a court officer warned her about the ramifications of her behavior, which he claimed were disturbing court proceedings.

Lan Hai Song, who entered Ghana using a Chinese passport bearing the number E00330545 and was awarded a one-year resident/work permission on October 23, 2014, has remained in the nation unlawfully since that permit expired on October 23, 2015.

Read Also  "I am Happy my daughter is suffering life, I bought a Bently with her school fees"- Kennedy Agyapong.

The court also discovered that the other defendants had been illegally residing in Ghana since 2020.

“The four, being Shi Li Wen, Huang Shen Jun, Li De Hao and Lan Hai Song are by this order to be handed over to the Regional Commander of the Ashanti Regional Command of the Ghana Immigration Service, Kumasi to effect their immediate deportation out of the Republic of Ghana.”