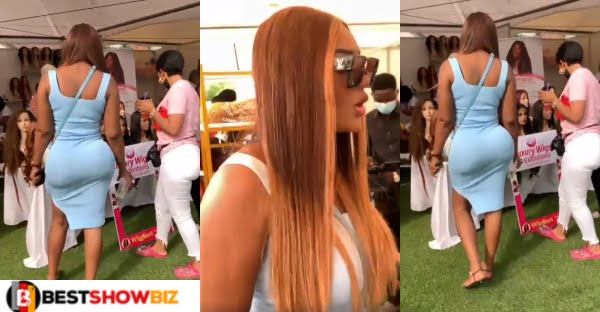 Where did you get this a$$ from?? Netizens ask Lawyer Sandra Ankobiah after she showed up on social media again with huge goods

Some netizens were disappointed with Lawyer Sandra Ankobiah after noticing her enlarged buttocks, which made a mockery of her appearance.

A video of Sandra Ankobiah at a recent event plainly indicates that she has gone to enhance her butt, and some netizens say she overdid herself because of the form of her a$$ in the attire she wore to the event.

Some netizens who saw the viral video of her a$$ remarked that Sandra Ankobiah disgraces herself since what she proceeded to do makes her previously gorgeous form appear stupid because her a$$ looks like tubers of yam.

Sandra Ankobiah is not the first female celebrity to have worked on her bums, and she will most likely not be the last, but they typically deny ever working on their buttocks when everything is clear, though some are courageous enough to confess it.

A lot of Netizens took to the comment section