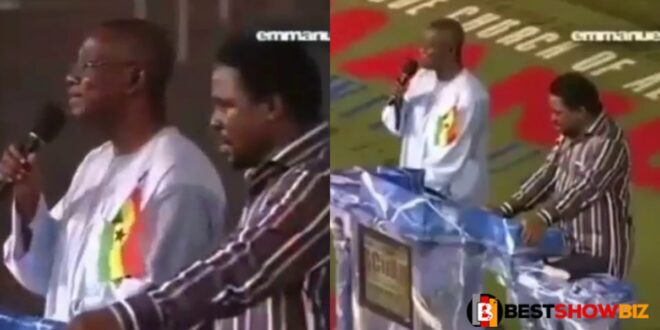 A video of the late Ghanaian president, John Evans Fiifi Atta Mills, at the late televangelist TB Joshua’s church has resurfaced on the internet.

Former President John Evans Fiifi Atta Mills’ spiritual father was TB Joshua, the founder of The Synagogue, Church of All Nations (SCOAN), who died on July 24, 2012.

As he addressed the congregation from the altar, the late president was captured on film beside TB Joshua.

”There is power in exchanging viewpoints and ideas with like-minded individuals. We are all the same children of God, my brothers and sisters.

Let us support one another, grasp one other’s hands, and worship the almighty God no matter what happens to us,” Professor John Atta Mills said.

And the truth is that the retro film that is circulating online has evoked strong emotions, particularly in light of how Africans have lost such brilliant brains as Atta Mills and TB Joshua.

SEE THE VIDEO BELOW.