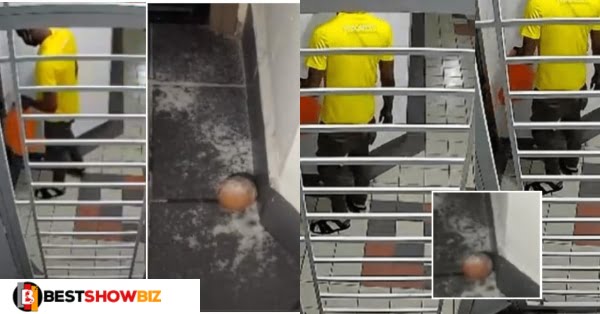 What an Evil world: Man caught on camera putting JuJu on the doorstep of his best friend

A viral video shows a young man putting juju at the door of his best friend, which was captured by a CCTV camera.

According to sources, the young man who had remained close to his friend began to notice that everything around him had been going wrong for some time and got concerned.

The evil young friend was reported to have been sprinkling juju in front of his door all the time but woke up one day to see something white, prompting him to examine the CCTV camera, where he discovered his own bosom friend was the culprit.

A neighbor of the man who was nearly killed shared the post on social media, writing:

This occurred in the Venice Hill condominium in Cheras, Malaysia. This Nigerian brother was spotted dropping charm for another brother.

The man had been complaining about his health, only to wake up this morning and see what someone had left in front of his door. He called his camera-wielding neighbors, and his best friend emerged as the ev*! doer. We had to expel him from our midst.”