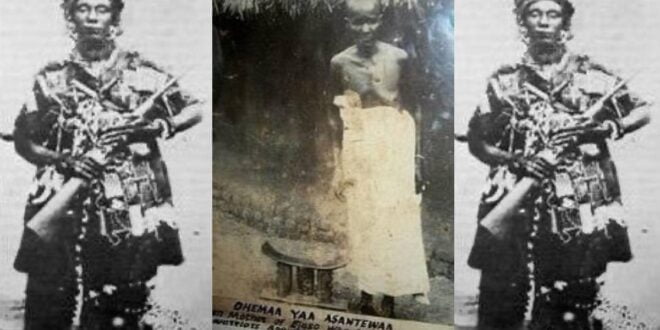 What a shock!, Picture of Yaa Asantewaa found out to be fake, real picture emerges,

You’ve been duped! Go back to your youth and re-learn your roots!

On Twitter, Yaa Asantewaa is currently trending, which is an odd development for a Monday morning.

The explanation is that her well-known picture, which has been used for a statue in the Ashanti Region, is obviously a fake!

This was called out by a Twitter user in a post that has since gone viral. As everybody is in disbelief, several celebrities have been tweeting about it.

The account wrote, “An American Girl Theatre Arts Student poses as Yaa Asantewaa in a bulletproof war jacket and fighting carrying a rifle, and this photograph has gone all over the world with some people believing the picture is actual Yaa Asantewaa.”

Lydia Forson and Ama K. Abebrese, among others, have tweeted about the topic. According to another source, the allegedly fake picture was used to create a statue in Ejisu.