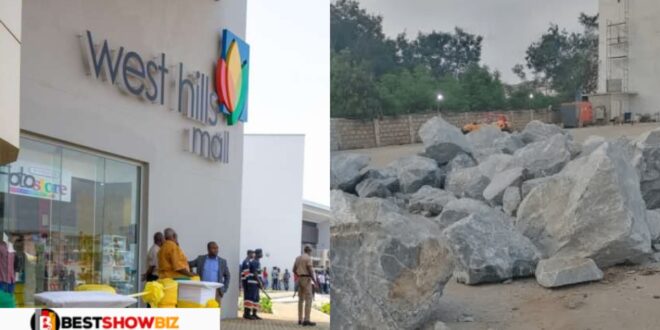 According to reports, the manager of the Westhills Mall, along with another individual, has been arrested for allegedly blocking the entrance to China Mall with rocks on Saturday.

Following a tip from the security guard at the China Mall that they were on their way to place rocks in front of the mall, the police have arrested James Mensah, 42, the facilities manager of West Hills Mall, and Samuel Annum Adjei, 44, a contractor, who were both charged with criminal vandalism.

The police were alleged to have responded quickly to the scene of the incident, where they detained both of them and transported them to the police station for further questioning.

Read Also  See Remarkable Before And After Photos Of Popular Ghanaian Celebrities with their Weight Loss.

The two have reportedly been identified as the individuals responsible for the rocks that were dumped in front of the China Mall, and they are supporting authorities in their investigations into the incident.