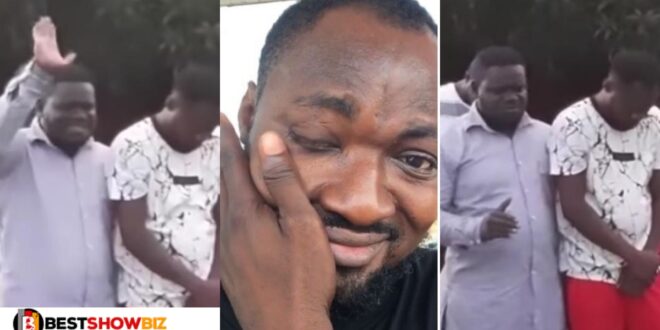 “We love and support you”- Father of Funny Face’s baby mama encourages him in new video after all the !nsults (video)

Although Funny Face has insulted his daughter, Funny Face’s father-in-law has come out in support of him and offered him some words of encouragement.

He chose peace and a better understanding of Funny Face’s situation.

He tells Funny Face in an audio clip circulating on social media that he will not die because he is loved and that the Almighty is protecting him because he is now a member of his family.

Things will get better, he assured him. He acknowledged that many people had offended him, but he should take heart, and that, due to the fact that he is now a part of him, he will not suffer any consequences.

He explained how he protects Funny Face spiritually and that he should not be concerned if he is physically ill.

He assured him that as long as he is related to him by blood, the Almighty will protect him, and all he has to do is be humble enough to accept it.

Vannesa’s father, also known as Jah Wisdom, assured Funny Face that he was aware of everyone and that he was not concerned about anyone with whom he had a problem.

He advised him to choose his friends carefully because they were a significant contributor to his problems.

He explained that what Funny Face is going through is a normal part of life and that he should be cautious about what information he shares with others and not place too much trust in them.

Jah Wisdom finished by telling him that some of his friends are envious of him, so he should keep going out and coming into himself.

Following a series of tantrums on social media, Funny Face released a suicide note he left for his children, which was shared widely on the internet.