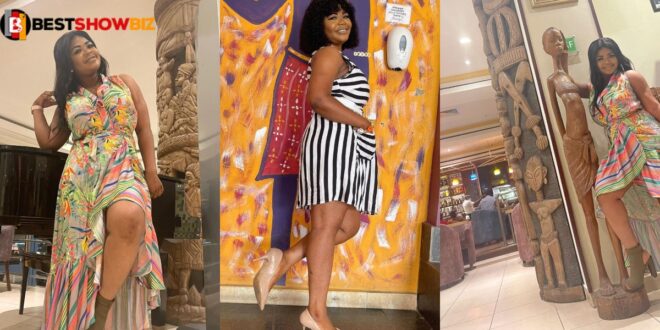 “We have to sleep with 3 men a day in other to make money and live comfortably”- Radio presenter discloses.

Female radio hosts have told harrowing stories about sleeping with guys for money in order to survive in this sweltering country.

Nana Adwoa Annan revealed all about how she has to date up to seven men at a time during an appearance on Neat Fm.

They have also been known to sleep with three men in one day, all in the sake of getting money.

Nana Adwoa made those remarks while discussing with Ola Michael on Neat Fm.

The system, she claims, is too heated, and women are making too little money.

Their salaries and allowances are simply insufficient to support themselves.

They must purchase wigs, dress appropriately for their employment, fill their automobiles with gas, and feed their families.

Furthermore, they must occasionally raise funds for their parents or ailing family members — there is always something to worry about.

She bemoaned the fact that males take advantage of this by abusing them before offering them any money.

She claimed that women used to be proud of dating only one man, but that nowadays, if you want to survive, you have to sleep around.

Nana Adwoa tried to make her remarks generic to women, but it was clear she was speaking from personal experience.

Take a listen to her below…

She was joined in the studio by two other presenters, dubbed “slay queens,” who echoed her sentiments.

They were only repeating what Moesha Boduong had said on CNN all those years ago.

Slay queens believe they must live a life beyond their means for whatever reason, and when they can not afford it, they explain it by claiming they must sleep with several guys.

If you do not want to, you do not have to sleep with many men! And why own a car if you can not afford to buy gas?

It is entirely up to you! The amount one must pay in order to enjoy a fashionable lifestyle.