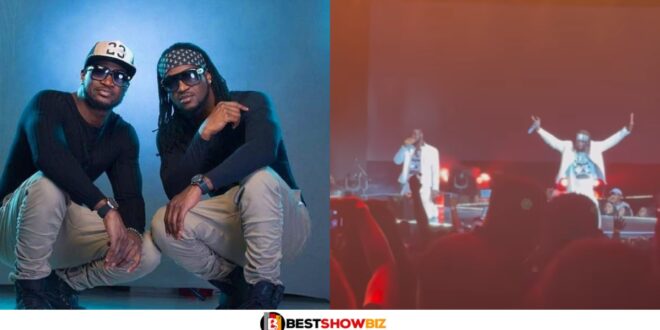 “We Are Sorry For What We Did.” Psquare Goes On Their Knees To Beg Fans (Video)

Nigerian singing duo Peter Okoye and Paul Okoye have officially apologized to their fans throughout the country.
To the delight of their supporters, the twins have appealed for forgiveness for their breakup.

It may be noted that the announcement of the music duo’s split in 2017 came as a surprise to fans due to an apparently irreconcilable family quarrel.

However, the musical twins reunited a few weeks ago to celebrate their 40th birthday in peace.

In a viral video, Psquare could be seen falling on their knees and apologizing to their fans present during their first concert together in a long time somewhere in Lagos.

“We sincerely regret the breakup and extend our heartfelt condolences to our fans all across the world.”

“I want everyone around the world to know that we are asking for forgiveness,” Psquare said.